i am writing this letter from the harbour of Taksim/Istanbul, we are here for two days with no sleep, no food, no water. They do net let us move and we are surrended. Cops dont let anyone to combine each other.Fucking police shoots out with the gas guns and rubber bullets. One of us the girl has died with the gas bullet shot on her head.  And the police didnt stop for 40 hours. These started with demonstrating  small park of trees and wanted to make a shopping mall over there.But in the first times people was jusr reading books and camping in there. Suddenly cops attached there with no reason and started firing the camps and shooting out peope.
During these days, prime minister recep tayyip stated that he is going to block selling drinks over around, and then he said we are not going to go on anymore with the rules that two drunks stated. That two drunk was Ataturk and Inonu. And added that "i said and its going to be done, even the world turns down" And that was the last step and broke people patience to him.,
And he is playing with the police like toys,and copsa re like HIS private army. All the cameras have lost communication, some times they are cutting the electricty and shoot with guns. On televisions there are no news on this issue. They stop letting people learn whats going on. Also they interrupt internet connection over there. We are just connecting from houses that all setup wireless passwords same in all houses. Cops gave damage to bank atms, cars, and show that like people has done. They are also throwing gas bombs from helicopters, and throwing bombs to mobile hospitals(doctors,trainee doctors,nurses were in there), houses . But everyone is like crazy and noo ne gave up. People are connected each other like everyone is sisters and brothers. In other locations you can find food,water adn medical threatment. All the apartments doors are opened ; for people to escape from cops. If you can not, you are dead. Cops beat you with numbers of groups and let you there, after that they do not let you go they throw you infront of AKP’s groups of people and they beat you as well. Police killed many people in here and loose the bodies. Also you can see in videos they shoot with no responsibility. Kill and left the deadbody there. They have no mercy. These were just started by reading protest in GEZİ. But people cant resist anymore to this kind of dictator in Turkey.And the army will gave ultimatom to police. We heard like this. But prime misiter still says that its just related with trees. But its totally lie. So my battery is too low. Hope we suffer this. We are the children of Ataturk as all over the World knows. We never give up for out freedom. Wish us luck friends. This night will last so long.. 20.000 more cops are coming from other cities. The cops beat guys badly in stations who are arrested.But we will be 100.000 and more and more. Last day we were with Besiktas and we fight with the police and police started to use chemical gases. Its so strong gas that you can not breath.. And we were under gas attack with 50 or more gas bombs around.

Everywhere there are barricats to protect ourselves from cops. We just want to be in streets to cheer up and protest. Not to be wild. But Cops threats us how to be wild and fight back.They impulse us to fight. But we just want to keep our side.
As a summary all these was a protest of dictator tayyip and his behaviours. If they were calm to us there would be no problem. We are fighting for our freedom. In our televisions there are no news about these things because they want to show that the people behaved like terrorist and thats why police was so tough. But all these are lies. Our protestors are so educated and they warn all eachother not to throw something to police,not to give damage to somewhere and not to do anything that would be bad for us. We just cheer up,sing and walk. But the provacators are all inside and want to show us bad. Everybody knows this and warn eachother all the time. But the govertments police army doesnt do the same.Beside Istanbul,in all over Turkey there are protests but sadly dead people. We think that there are more then 50 people dead in all around Turkey. But everybody is thinking the same. STOP using our freedom under restraint. Everybody in World knows that we can not live under restriction.  We didnt speak for many many years but we are born again. And its not a resistance, its revival. Wish us luck for our  #direngezi movement.

As to define that who were behind us. ?

No one was behind us. We have never used a political group slogan, flag or someting. We are just what we are. As to give an example from football, all club hooligans come together and help eachother,different political party members with no flag, no shirt,with nothing on his self to show that he/she belong to a party help eachother and ext, that you can not see this ever in World again. Believe that no one can joined us with a political or other identification. We are just humans that want get out freedom back.
I would like to thank for all living foreign friends in Istanbul, They didnt preserve their help from us. Beside this Thank you all over the World who send their positive feelings for us. 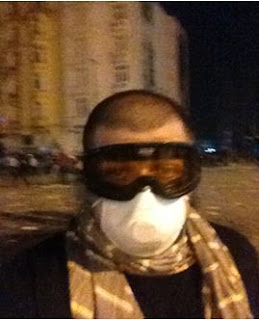 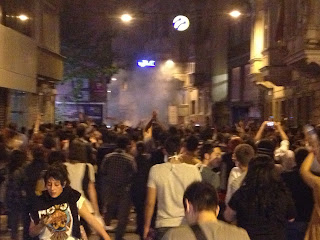 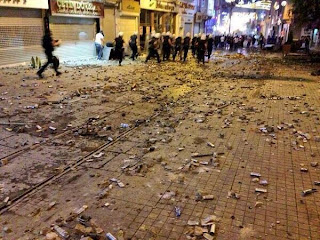 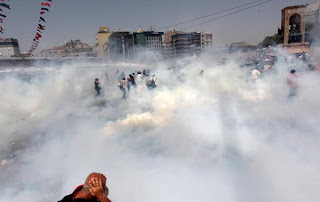 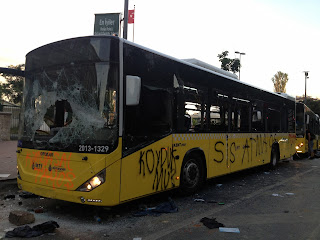 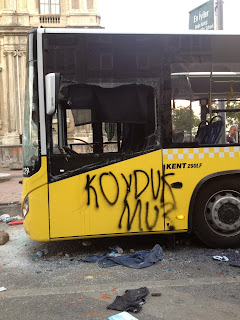 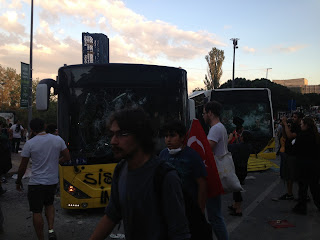 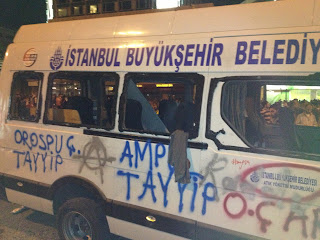 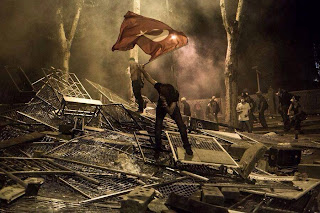 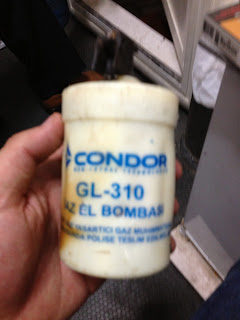 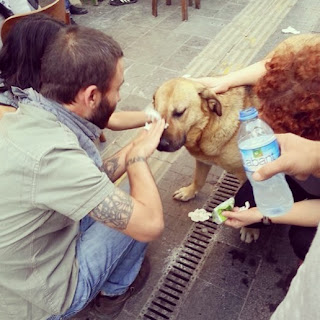 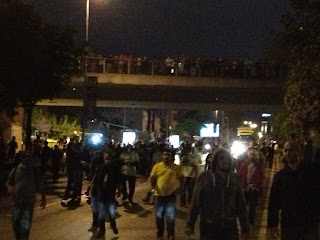 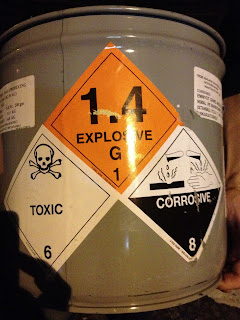 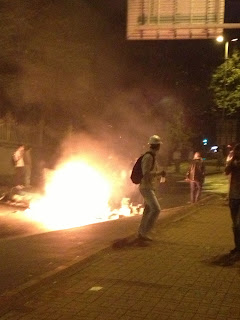 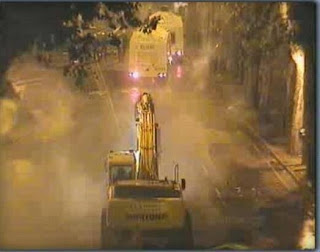 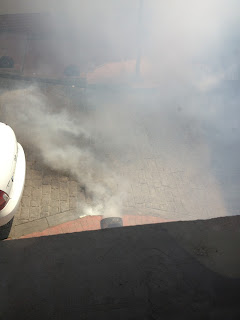 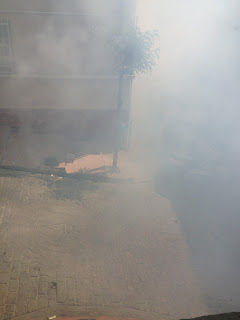 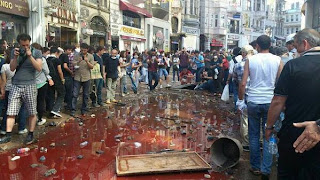 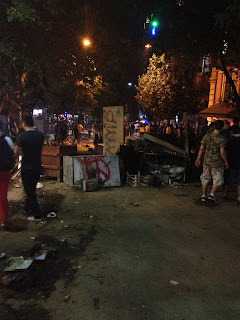 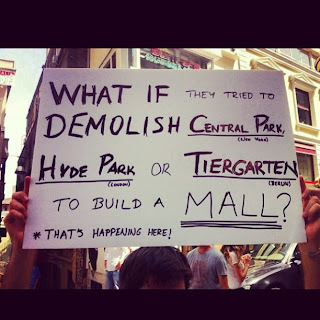 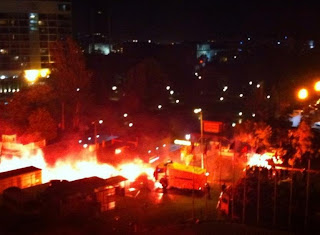 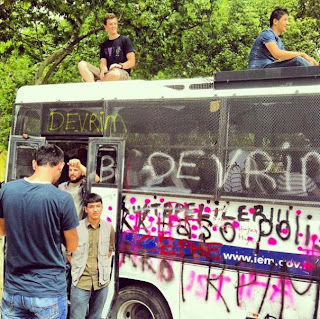 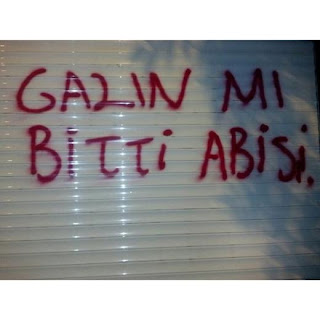